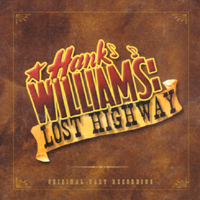 (3 / 5) Fans of country-music icon Hank Williams may hesitate to buy the album of this Off-Broadway biomusical when there are so many recordings of the real deal available. But it’s a fine CD nonetheless, and a good introduction to the music of Williams, whose numerous hits — ”Jambalaya (On the Bayou),” “I’m So Lonesome I Could Cry,” and “Your Cheatin’ Heart,” to name only a few heard here — captured numerous hearts during his brief career. The recording preserves many of the show’s dramatic moments, interspersing dialogue with its two dozen tunes. (“Hey Good Lookin’ ,” first heard in a purposefully bad rendition that’s meant to illustrate Williams’ descent into drunkenness, appears again unsullied in a bonus track.) The amazing Jason Petty, whose crooning and yodeling could almost be mistaken for Williams’ own, delivers crisp renditions of these classic songs with the help of a tight instrumental ensemble featuring Myk Watford on guitar, Drew Perkins on violin, and Stephen G. Anthony on bass. Michael W. Howell, a blues singer who inspires Williams, lends his rich voice to the soulful “This Is the Way I Do” and “The Blood Done Sign My Name.” — Brooke Pierce