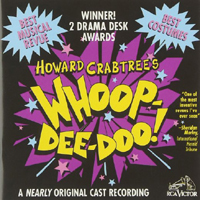 (3 / 5) This show was the brainchild of costume designer Howard Crabtree, whose outlandishly funny costumes were the real stars of the production—each outfit more elaborate than the last, yet all looking as if they cost pennies to build. Throughout, Crabtree (playing himself) is heckled by Jay Rogers, who questions his taste and preaches that “less is more.” This gives the revue a sort of structure and also a good finish: Howard uses “Less Is More” as a finale that belies its title, going on and on and on. The songs include one about the much-married Elizabeth Taylor, one featuring the Invisible Dance Company (“They’re the biggest no-talents I’ve never seen,” complains Rogers; “I can see right through them!”), and one about Sgt. Sirloin and his corps of patriotic potatoes being shaken by the arrival of Private Banana (“The new recruit is a fruit!”). There’s also a mini-musical about Nancy Reagan’s life, and a number called “You Are My Idol,” in which an airplane accidentally drops a crate of cast albums on a tribe of primitives who assume it’s an offering from the gods and begin worshiping/imitating Ethel Merman, Carol Channing, and Rex Harrison. The sensibility throughout is matter-of-factly gay, although not so much as to make straight folks uncomfortable. The material was mostly written by Mark Waldrop and Dick Gallagher, but there are also contributions by David Rambo, Peter Morris, Brad Ellis, Eric Schorr, Bruce Sussman, and Jack Feldman.  — David Wolf