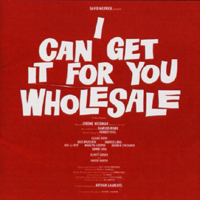 (3 / 5) This show has gone down in history for having launched the career of Barbra Streisand, but there’s so much more here. Jerome Weidman adapted his own novel about a Seventh Avenue go-getter who sells his soul for shmattehs. Composer-lyricist Harold Rome’s score percolates with energy. Elliot Gould stars as schemer Harry Bogen, displaying plenty of nasty vitality in numbers like “The Way Things Are” and “The Sound of Money.” This is, however, an ensemble show filled with vividly etched character portraits. Marilyn Cooper, as the girl who loves Harry, delivers two wry ballads: “When Gemini Meets Capricorn” and “Who Knows?” Lillian Roth, as Harry’s doting mother, offers chicken soup for the soul in the introspective “TooSoon” and the chilling “Eat a Little Something.” And yes, Streisand hits the comedy number “Miss Marmelstein” out of the park. Rome’s lyrics evoke a world of middle-class Jews who work in the garment trade, while his music merges jazz with Yiddish harmonies and a touch of Leonard Bernstein. Sid Rarnin’s percussive orchestrations are among the most unique of the period. It’s an underrated, distinctive achievement.  — David Barbour