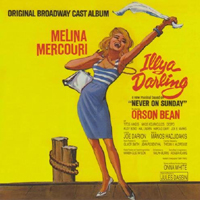 Original Broadway Cast, 1967 (United Artists/Kritzerland) No stars; not recommended. Having had an art-house film hit with Never on Sunday, writer-director Jules Dassin and the Mrs., otherwise known as Melina Mercouri, teamed up again for the stage musical version, which ran over 300 performances before pretty much vanishing from Broadway’s collective memory. The cast album was very belated transferred to CD (in 2008), and even then was only made available in a limited edition. Once again, Mercouri is Illya, the happiest prostitute on the island of Piraeus. This time, Orson Bean is Homer, the dopey American intellectual who wants to introduce her to culture and the finer things in life. The score, with music by Manos Hadjidakis (who did the film) and lyrics by Joe Darion, is heavy with bouzoukis (Ralph Burns orchestrated) and lusty, life-affirming numbers. The only song that stands out is “Never on Sunday” — which, of course, comes from the movie. Mercouri’s smoky voice and sexy intonations are fun to hear, but Bean’s numbers, “Golden Land” and “I Think She Needs Me,” are pretty dire. And “Medea Tango,” which tries to replicate one of the funniest moments in the film (when Illya explains Greek tragedy to Homer), falls flat. The actress Despo, playing a character named Despo, sings “I’Il Never Lay Down Anymore” — a title that tells all. There are also silly local-color items such as “Heaven Help the Sailors on a Night Like This.” — David Barbour