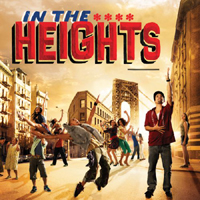 (4 / 5) Winner of 2008 Tony Awards for Best Musical, Best Original Score, and Best Orchestrations, In the Heights was the first Broadway musical hit to use rap as an essential storytelling component in a score that blends Latin musical styles with hip-hop sensibilities. Set in the Latin-American community of Manhattan’s Washington Heights, the show nestles sentimental stories of first- and second-generation immigrants pursuing their various American dreams and romances amid larger themes concerning notions of home and gentrification. The Grammy Award winning cast album, a two-disc set, preserves the entirety of a dynamic score with both music and lyrics by Lin-Manuel Miranda, who also conceived the show and played the leading role of bodega-owner Usnavi. Fueled by high-octane horns and propulsive percussion, the passion-filled orchestrations by Alex Lacamoire and Bill Sherman support Miranda’s dramatic rapping and the superb singing of the other leads. If you don’t like salsa, merengue, Latin jazz, and hip-hop, you’re out of luck here; but even if the score overall is somewhat lacking in variety, the lengthy individual numbers are built of different-sounding sections. They mix diverse styles, tempi, rhythms, instruments, dynamic levels, and vocal qualities (both spoken and sung), constituting variegated musical journeys unto themselves. Most of the songs also integrate lots of funny, interestingly detailed, and/or emotionally touching dialogue, lending a potent theatricality to what is essentially a pop-music score. Album highlights include “When You’re Home,” a snappy duet performed by Mandy Gonzalez and Christopher Jackson as the show’s young lovers, Nina and Benny; the tear-jerkers “Everything I Know” and “Inutil,” gorgeously sung by Gonzalez and Carlos Gomez, respectively; “Benny’s Dispatch,” a rhythmic treat; and the exciting ensemble number “Carnaval del Barrio.” — Lisa Jo Sagolla