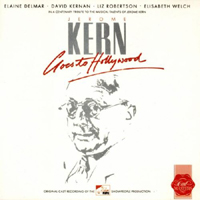 (2 / 5) It’s hard to understand the rationale or need for Jerome Kern Goes to Hollywood, a songwriter revue that was devised by one of its British co-stars, David Kernan. He, Liz Robertson, Elaine Delmar, and musical theater veteran Elisabeth Welch sing 22 Jerome Kern songs that may have appeared in films but weren’t necessarily written directly for that medium — for example, the selections from Show Boat. Virtually all of the numbers heard here are well known: “Smoke Gets In Your Eyes,” “I Won’t Dance,” “The Last Time I Saw Paris,” “Bill,” “I’m Old Fashioned,” and “All the Things You Are.” They are certainly well sung, particularly by Delmar.  Welch is the drawing card for fans of legendary British performers, but although her four solos here are fine, it’s hard to get worked up over them. (Note: A 1986 Broadway production of this revue with the same cast lasted only nine performances.) — David Wolf