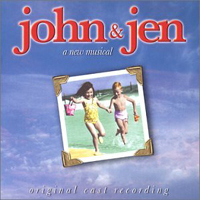 (2 / 5) Talk about intimate: John & Jen is a three-character musical for two actors. Unfortunately, in its relentless focus on a single dramatic situation, the piece is perhaps too small. Carolee Carmello is Jen, who grows up protecting her younger brother, John, from their abusive father. Jen goes off to college, becomes a hippie, and falls in love with a draft-dodger. To please his father, John enlists in the Army and is killed in Vietnam. In Act II, Jen is now a single mother with a son named — you guessed it. Jen smothers the young John with unwanted attention, driving their relationship to the breaking point. Rated “S” for Sensitivity, John & Jen is a tearjerker that nevertheless leaves listeners surprisingly dry-eyed. The songs by Andrew Lippa (music) and Tom Greenwald (lyrics) are workmanlike, and the book (by both) is too schematic, so the characters and their airless existence soon become tiresome. Still, the final three numbers — “The Road Ends Here,” “That Was My Way,” and “Every Goodbye Is Hello” — do approach the emotional payoff that the authors aimed for. Carmello, one of our best singing actresses, works wonders with the material, and James Ludwig is also fine as the two Johns. In fact, these performers make the score sound better than it actually is. Still, it’s an interesting calling card for two young writing talents and for orchestrator Jason Robert Brown, who at this time had not yet established himself as a musical theater composer/lyricist. — David Barbour