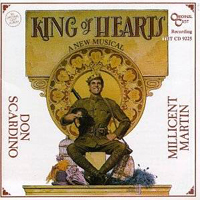 (1 / 5) When the charming film King of Hearts, a cult hit of the 1970s, was adapted as a big Broadway musical, it curled up and died. Don Scardino starred as Johnny, a young American soldier in World War I. Sent to a French village in search of a time bomb, Johnny doesn’t know that all the townspeople have evacuated and the folks he encounters are actually the escaped
inmates of the local lunatic asylum. The story is afflicted with the ridiculous notion that crazy people are beautiful visionaries, while the score lacks dramatic punch and variety. For the recording, composer Peter Link replaced the original Broadway orchestrations with more intimate arrangements that make the whole thing sound like a collection of cutouts from French cabaret albums. Jacob Brackman’s lyrics are okay, but the score is too weak to make any of the songs special, although Scardino’s sweet rendition of “Close Upon This Hour” does have a nice folk-pop quality. Also on hand are Millicent Martin as one of those soulful European madams, Pamela Blair as a virginal prostitute, and Bob Gunton as a circus master. It all begins pleasantly enough, but everything sounds alike, and the recording sounds like a demo. — David Barbour