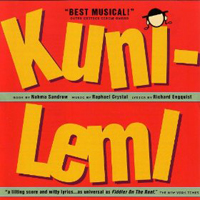 (2 / 5) Avrom Goldfadn’s Yiddish farce The Two Kuni-Lemls is all but forgotten today. Even so, New York’s Jewish Repertory Theatre (JRT) commissioned a musical version of it in 1984, and the result turned out to be a success. But it wasn’t until the JRT revived Kuni-Leml 14 years later that the musical was recorded. The album reveals this to be a charming show — no more, no less. Raphael Crystal’s music is bouncy and Richard Engquist’s lyrics are solid, but that’s pretty much the best that can be said for the score. The strength of the recording lies in the cast, headed by Danny Gurwin as the title character, a pious student who’s roped into marrying a rich man’s daughter; and Farah Alvin as a matchmaker’s daughter who’s unlucky in love. These two are hilarious in their solos, “What’s My Name?” and “Don’t Worry, Darling,” and delightful in their duet, “Do Horses Talk to Horses?” — so much so that they rise above the middling material. Paul Harman is suitably over-the-top as the boisterous matchmaker. David Wolfson leads a four-piece band through the nicely orchestrated score.  — Seth Christenfeld