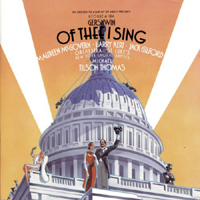 (4 / 5) This performance doesn’t vary much in character from the dully dutiful reading of the Gershwins’ Of Thee I Sing that accompanies it. But Let ‘Em Eat Cake, a 1933 George and Ira Gershwin-George S. Kaufman-Morrie Ryskind sequel to that Pulitzer Prize winner, is so darkly different, and the music so fascinating, that it’s easily the more rewarding listening experience. (Most of the score was previously unrecorded.) The show pokes fun at unions, socialists, capitalists, influence brokers, the League of Nations, and baseball. You can understand why it was rejected by critics and audiences — it’s too acerbic and almost hysterically bitter, with little of its predecessor’s sly good humor — but it’s stupendous from a musical standpoint. The riches start immediately as a dissonant, percussive overture segues into “Tweedledee for President,” and the score throughout is highly adventurous. (It’s as if we can hear George warming up for Porgy and Bess.) Maureen McGovern leads “Mothers of the Nation,” a real find with a mock-sanctimonious lyric wedded to a soaring, anthem-like melody. Incidental numbers and ensembles like “Union Square,” “They’re Hanging Throttlebottom in the Morning,” and the ferocious title song show two geniuses pushing against the walls of musical theater convention with all their might. The performances of Paige O’Hara and David Garrison are enormous assets here, as they are in Of Thee I Sing,  and Michael Tilson Thomas’s conducting sounds energized by the prospect of reintroducing so much marvelous material to the world. — Marc Miller