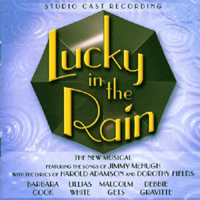 (1 / 5) For this musical, which was seen at the Goodspeed Opera House in 1997, librettist Sherman Yellen wrapped a yarn of romance among expat American journalists in 1927 Paris around a batch of songs by Jimmy McHugh, with lyrics by Harold Adamson and Dorothy Fields. Don’t expect much; Yellen’s idea of historical realism includes Gertrude Stein singing “On the Sunny Side of the Street” and a newsroom full of reporters performing a musical tribute to Charles Lindbergh with “Comin’ In on a Wing and a Prayer.” Others passing through include Josephine Baker and Isadora Duncan. With its easily ignorable plot and most of the songs for each of the major characters sung by more than one performer, this studio cast album works best as a nod to McHugh by Broadway A-listers. Barbara Cook has several lovely tracks, but they appear to have been taken directly from her tribute album to Dorothy Fields, Close as Pages in a Book. Other notable participants are Malcolm Gets, Patrick Wilson, Debbie Gravitte, and Lillias White, but Peter Matz’s orchestrations are more evocative of a pop album than a Broadway show. —David Barbour