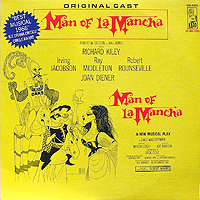 (5 / 5) This first recording of the Mitch Leigh-Joe Darion score for their musical inspired by Miguel de Cervantes’ epic novel Don Quixote is definitive. Richard Kiley is so vocally and dramatically brilliant as Cervantes/Quixote that he set the bar almost impossibly high for all future interpreters of the role. His fully committed, richly sung performance of the score’s signature item, “The Impossible Dream” — one of the last Broadway songs to become a pop hit in the 1960s — is all that anyone could ask for. Playing opposite him as Aldonza, Joan Diener gives an amazing vocal performance. She was one of those rare singing actresses who boasted a strong chest voice with a full soprano extension, and when Diener ends her powerfully belted performance of “It’s All the Same” with a flight into the soprano stratosphere, or when she switches back and forth between registers in “Aldonza,” the effect is breathtaking. Completing the musical’s central triumvirate, Irving Jacobson’s Sancho Panza is warm, funny, and endearing. Among the excellent supporting cast, the golden-voiced Robert Rounseville and Ray Middleton are the Padre and the Innkeeper, respectively. Harry Theyard, as a muleteer, offers two starkly contrasting performances of “Little Bird” — one gorgeously lyrical, the other frighteningly violent. Even though the flamenco rhythms employed by Leigh are inappropriate to the period, and some of Darion’s lyrics are ungrammatical, there is much to love about this score. If there’s anything to regret in the CD transfer of the recording, it’s that the “I, Don Quixote” number eliminates the terrifying Inquisition theme that begins this track on the LP. On the plus side, the technical quality of the CD is superb. — Michael Portantiere 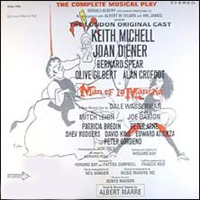 (3 / 5) While this is not really a “complete” Man of La Mancha, the two-LP set does give us a vivid sense of the show through its inclusion of much dialogue and some well produced sound effects. Keith Michell is almost as magnificent a Cervantes/Quixote as the role’s creator, Richard Kiley. Joan Diener is back as Aldonza, but her performance here is extremely mannered and lacking in spontaneity; it sounds as if she had given up on playing the character, having decided instead to deliver a star turn. Despite this major caveat, the London Man of La Mancha deserves a CD release: The supporting cast is fine, especially Alan Crofoot as the Padre, and the sound quality of the recording is excellent. Another plus is that we get to hear that wonderfully scary Inquisition theme more than once. — M.P. 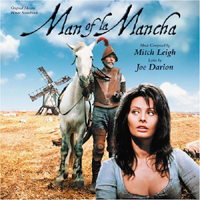 Film Soundtrack, 1972 (United Artists/Varese Sarabande) 0 stars; not recommended. What a disaster this is. On paper, Peter O’Toole and Sophia Loren would seem like excellent casting for a film version of Man of La Mancha, providing that their singing voices were skillfully dubbed by others. Alas! Simon Gilbert, who ghosts for O’Toole, has a good-enough voice but very strange mannerisms of enunciation; just listen to him sing the lyric “thou art base and debauched as can be,” hitting every “b” with a sledgehammer. As for Loren, she was unwisely allowed to do her own singing here, and the results are borderline embarrassing. Her voice has about one-third the range required for Aldonza’s music, and her weirdly modified Italian accent is a further liability. Up against these two, James Coco manages to retain his dignity as Sancho, although he sings his part in “I, Don Quixote” down the octave from where it’s written. Ian Richardson has far too thin a voice for the Padre, but this is almost a moot point, as the beautiful song “To Each His Dulcinea” has been cut. The one good thing about this recording is that the orchestrations for symphony-sized forces were done skillfully; it’s nice to hear strings playing this score, even if the original orchestrations for a much smaller band remain superior.  — M.P. 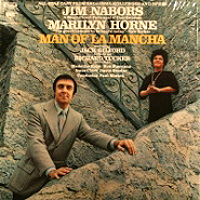 (1 / 5) This recording was only briefly in print, and it’s hard to find nowadays. Jim Nabors, famous as the star of the 1960s TV sitcom Gomer Pyle, USMC, possessed a legit baritone voice that gave him some additional career mileage. But his sound here is affected and ponderous to the point of camp — certainly not the effect that a good Cervantes/Don Quixote is supposed to make. His Aldonza is superstar opera diva Marilyn Horne in a frustrating performance; her magnificent mezzo is right for the role, but she sings “It’s All the Same” and other songs so squarely and with such low energy that they make little impression. (This is surprising, as Horne has done very well with musical theater material on other occasions; perhaps she was under-rehearsed.) By far the best of the three principals is Jack Gilford, a wonderfully endearing Sancho. The supporting cast — Madeline Kahn as Antonia, Ron Hussman as the Innkeeper, and the great opera tenor Richard Tucker as the Padre — is uniformly excellent and the original orchestrations are wisely used, but the unsatisfying performances of Horne and especially Nabors make this album little more than a curiosity. — M.P. 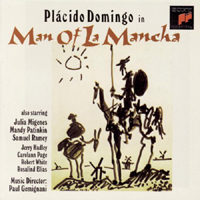 (1 / 5) There’s nothing terribly wrong about this recording aside from the presence of the outrageously mannered Mandy Patinkin as Sancho Panza. But, somehow, the whole thing doesn’t jell, even though the original orchestrations are expertly conducted here by Paul Gemignani. Opera icon Placido Domingo sings Quixote’s songs with all of the glorious tone you’d expect, but his Spanish accent is distracting — even though he is playing a Spanish character. (This is, after all, an American musical.) Julia Migenes is well cast and has many fine moments, but her performance isn’t as mercurial as Joan Diener’s on the original Broadway recording; she just doesn’t use her chest register in the same full-out way as Diener. Jerry Hadley does a good job as the Padre, but though Samuel Ramey possessed one of the most voluminous bass voices in operatic history, it’s not a voice that’s appropriate to the Innkeeper — or, really, to any other musical theater role. This isn’t the worst recording of Man of La Mancha, but it’s far from the best. — M.P. 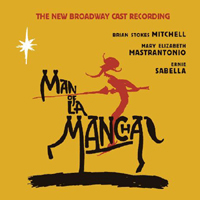 Broadway Cast, 2002 (RCA) 0 stars; not recommended. Brian Stokes Mitchell’s performance as Coalhouse Walker in Ragtime was a triumph, but even judging solely on the basis of this recording, the role of Cervantes/Don Quixote in Man of La Mancha is not in his wheelhouse. While Mitchell possesses an impressive baritone, his singing style is ill-suited to this assignment; he slides off of some notes like a pop/jazz vocalist, and his grandstanding rendition of a pointlessly extended version of “The Impossible Dream” is off-putting. Equally disconcerting is his delivery of the  dialogue that’s included here. When playing Cervantes, Mitchell sounds like a genial TV-sitcom actor, and when he morphs into the Quixote characterization, he assumes an oddly ponderous tone. Most of this production’s co-stars and supporting players are also miscast. As Aldonza, Mary Elizabeth Mastrantonio displays a beautiful soprano voice when she doesn’t have to push (as in the moving “What Does He Want of Me?”), but there are some harrowing moments when she switches vocal registers to negotiate the more-challenging sections of the score (as in the final measures of “It’s All the Same”). And her delivery of dialogue is just as stylistically inappropriate as Mitchell’s, although for a different reason: This Aldonza sounds as if she came from Brooklyn. Ernie Sabella, vocally over-parted as Sancho Panza, has so much trouble with breath support that he chops up phrases willy-nilly. On the other hand, Mark Jacoby certainly has the  goods for the role of the Padre, and Don Mayo sounds fine as the Innkeeper. It’s ironic that one of the best singers in the cast, Stephen Bogardus, has very little to sing as Sanson Carrasco. One final reason not to bother with this recording is that it doesn’t include the show’s stirring overture. — M.P.