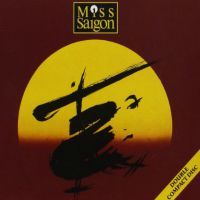 Original London Cast, 1989 (Geffen, 2CDs) No stars; not recommended. Like The Phantom of the Opera and Les Misérables, its equally Eurotrashy predecessors, Miss Saigon followed a crooked path to enormous popular and financial (but not artistic) success: Create a stage musical based on a story that has been beloved for generations and, with the help of shrewd marketing, it will run for years — even if the adaptation is third-rate. The plot of Miss Saigon is based on that of the Puccini opera Madama Butterfly, with the action reset at the time of the Vietnam War. But the Claude-Michel Schönberg-Alain Boublil show built around that brilliant idea has one of the most impoverished scores ever contrived for the musical theater, and one that includes a couple of dicey borrowings by composer Schönberg: “Why, God, Why?” begins with a beautiful tune that was originally written by Richard Rodgers for “There’s a Small Hotel,” and the melody that accompanies the lyrics “You will not touch him, don’t touch my boy” is that of the folk song “Hang Down Your Head, Tom Dooley.” The French-speaking librettist Boublil’s collaboration with Richard Maltby, Jr. yielded lyrics that are awkwardly phrased to the point of semi-literacy. (A few examples among dozens: “God, the tension is high, not to mention the smell,” “My parents got themselves killed in the week you changed sides,” and “You must decide upon which side you’re really on.” ) The song “Movie in My Mind” illustrates the chasm between the creators’ goals and their abilities: The idea of the Vietnamese prostitutes imagining an alternate reality in order to bear the selling of their bodies is interesting, but the music and lyrics are utterly pedestrian. Although it’s difficult to identify the nadir of the score, one good candidate is “Bui Doi,” a shamelessly manipulative plea on behalf of children sired by American servicemen and left behind in Vietnam; at least experiencing Miss Saigon via audio recording spares one having to view the tasteless film that was projected onstage during this sequence. Listeners are also spared the spectacle of the completely Caucasian-looking and British-sounding Jonathan Pryce in the role of the Engineer, an oily Eurasian pimp, but Pryce is badly miscast even from an aural standpoint. On the plus side, Lea Salonga sounds lovely and winsome as Kim. Simon Bowman as her lover, Chris, sings well but doesn’t sound American, which is a problem in terms of the plot. — Michael Portantiere 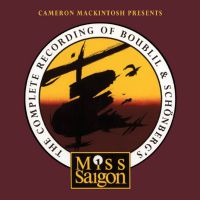 Studio Cast, 1995 (Angel, 2CDs) No stars; not recommended. The CD booklet notes assure us that there was much more to the success of Miss Saigon than the stunning onstage simulation of the landing and takeoff of a helicopter. Yet this recording begins with the whirring of chopper blades, as if to admit: “Yes, that special effect is what most people will remember about the show.” Billed as a “complete recording,” it includes revisions of the score that were made following the London production. The cast, drawn from several of the show’s worldwide productions, is backed by a huge orchestra. Joanna Ampil’s Kim is very much in the Lea Salonga mold, which is a good thing. The partly Asian Kevin Gray brings credibility to the role of the Engineer, but even he can’t triumph over such dreck as “The American Dream,” a hit-them-over-the-head number in which the title phrase is repeated 18 times. Like his recorded predecessor in the role of Chris, Peter Cousens, from the Sydney company, has a fine voice but is unable to sound convincingly American. Hinton Battle sings John’s “Bui Doi” for all it’s worth, which is very little, and the thankless role of Ellen is well handled by Ruthie Henshall. The orchestra, conducted by David Charles Abell, plays beautifully, and the sound quality of the recording is superb, but it’s all in service of a score that deserves to be consigned to the musical theater junkyard. — M.P.