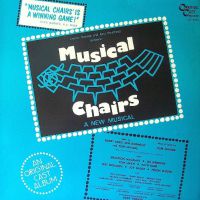 Original Broadway Cast, 1980 (Original Cast Records/no CD) No stars; not recommended. After only 14 performances, Musical Chairs vanished from sight, but the show yielded a cast album. The episodic “plot” concerns the folks in the audience on opening night of a play. Everyone, it seems, gets a song: the playwright (Tom Urich); two bitter playgoers (Brandon Maggart and Joy Franz) who have been dragged to the show by their spouses; another playgoer (Scott Ellis!) whose date (Susan Stroman!) shows up very late; some amateur divas; and a trio of tap-dancing critics. There’s even a song about hitting the ladies’ room — which, naturally, closes the first act. Composer-lyricist Tom Savage, who’s also one of the three bookwriters credited, provided a few better-than-mediocre pop-ballad melodies, but the up-tempo numbers are silly, and most of the lyrics are pretty terrible. (Example: “Give me some time for analysis / I’ll find their strengths and their fallacies.”) Unless you’re a Brandon Maggart completist, this recording isn’t worth your time. — Seth Christenfeld