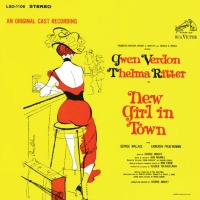 (4 / 5) Although rarely revived today, New Girl in Town ran for a respectable 431 performances on Broadway, and this adaptation of Eugene O’Neill’s Anna Christie sounds like a hit on the cast album. The score, by composer-lyricist Bob Merrill, is bouncy and colorful. Highlights include the naughty “On the Farm,” the catchy “The Sunshine Girl,” and the beautiful “Look at ‘Er” and “Did You Close Your Eyes?” The terrific performances of Gwen Verdon and Thelma Ritter in this show earned them a rare tie for Tony Awards as Best Actress in a Musical. George Wallace is fine in the big baritone role of Mat, Cameron Prud’homme is effective as Chris, and Lulu Bates and Mara Landi stand out in “Flings.” — Gerard Alessandrini