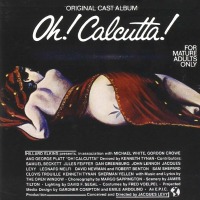 Original Broadway Cast, 1969 (Aidart/DRG) No stars; not recommended. Given that numerous scores by Cole Porter, Rodgers and Hart, and Jerome Kern remain unrecorded, the existence of this album — and its reissue on CD — is outrageous. Oh! Calcutta! was a good idea: an erotic revue written by such interesting and gifted people as Samuel Beckett, Jules Feiffer, John Lennon, and Sam Shepard. (Exactly who wrote what was revealed for the first time in Sherman Yellen’s excellent CD booklet notes.) But the show was developed by people with no musical theater experience or skill. In fact, it’s almost perversely unmusical in design and direction. Oh! Calcutta! famously played much of its marathon run to non-English-speaking tourists, who bought tickets not for the Beckett but because the cast members took off their clothes. The music recorded here isn’t theatrical at all; rather, it’s soft rock of no particular quality, like the background score of a movie. Professional actors-singers are featured in only three of the 12 cuts. The others are performed by composers Robert Dennis, Peter Schickele, and Stanley Walden, who — collectively known as The Open Window — make up the show’s band. Only one of the selections, “I Like the Look,” sounds like a theater song. I mention this because it’s the last track on the album, so you’ll probably never hear it. — David Wolf