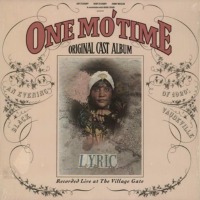 (3 / 5) Beginning in the late 1970s, the theater turned a nostalgic and admiring eye on the black musicals of earlier years — the imperishable songs, the raucous humor, the artists who triumphed in spite of dire conditions and Jim Crow laws. A number of revue-type shows celebrated black vaudevillians and their music; One Mo’ Time was set backstage at the fabled Lyric Theatre in New Orleans, circa 1926. The brainchild of writer-choreographer-costar Vernel Bagneris, the show had a tiny cast, a rudimentary plot, and a lot of exuberant music. It enjoyed a long run at New York’s Village Gate, where this live recording was made. The singers exude scrappy energy and an obvious love of the material, which includes “Miss Jenny’s Ball,” “Kiss Me Sweet,” and “Muddy Water.” Much of the music derives from Bessie Smith’s repertoire, including songs she wrote, so it makes sense to have a Smith-like character in the show. Unfortunately, Sylvia “Kuumba” Williams can’t touch the genuine article, and both she and Bagneris are out-sung by fellow cast members Topsy Chapman and Thais Clark. Veteran trumpeter-singer Jabbo Smith makes a guest appearance, performing more in the style of ’50s rhythm-and-blues than ’20s vaudeville. What’s most important, however, is the vitality and sincerity of all the performers as they pay homage to their predecessors. — Richard Barrios