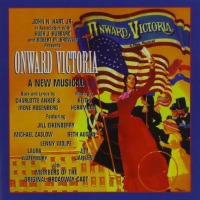 (1 / 5) Although the subject was ripe and the characters were fascinating, Onward Victoria was a one-performance disaster that nonetheless yielded a cast album. The story, by librettists-lyricists Charlotte Anker and Irene Rosenberg, centers on the 19th-century feminist Victoria Woodhull and her adventures in New York with Elizabeth Cady Stanton, Henry Ward Beecher, and other notables. The show’s stirring themes include religious hypocrisy and women’s rights, but the characters tend to sing about these issues in shallow polemics (“Revolution’s in the air like an impending storm”), and Keith Herrmann’s music, while generally constructed as a traditional musical theater score, is styled mostly as soft rock. Jill Eikenberry is a thin-voiced Victoria, and Michael Zaslow is treble-y as Beecher, but Lenny Wolpe has one good moment in “Unescorted Women.” By the time Victoria is defending the good reverend on the witness stand with the striptease-like “A Valentine for Beecher,” in which she sings about how “well-endowed” he is, credibility and good taste have gone out the window.  — Marc Miller