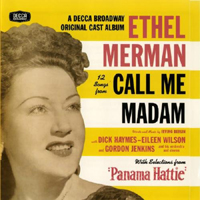 (3 / 5) Piggybacked onto the Decca CD issue of the Call Me Madam studio album starring Ethel Merman are four selections from Panama Hattie in their first appearance since their original 78rpm release in 1940. They certainly don’t represent Cole Porter at his best in songs such as “My Mother Would Love You” and “Let’s Be Buddies.” Still, it’s nice to have these recordings, along with ”I’ve Still Got My Health” (in a cut-down version) and “Make It Another Old Fashioned, Please.” Merman performs them exactly as you’d expect, joined by eight-year-old Joan Carroll, who speaks her lines rather than singing them because of the child-labor laws of the era! Forgive me for admitting a preference for Kaye Ballard’s more complete “I’ve Still Got My Health” on Ben Bagley’s Cole Porter Revisited and Carmen Alvarez’s more nuanced “Make It Another Old Fashioned, Please” on Bagley’s Decline and Fall album, but I wouldn’t want to be without these delightful Merman souvenirs. — David Wolf