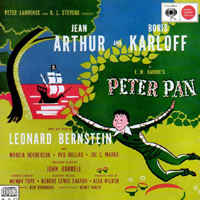 (1 / 5) This is a little-known, unusually lackluster score by Leonard Bernstein, not the beloved Peter Pan musical of four years later. Except for students of its composer, it’s hard to imagine anyone actually wanting this recording. It presents a straightforward version of James Barrie’s play, edited for records in the manner of a radio drama, with some songs interspersed. Only five musical selections are included; the ballet music and “Never Land,” written for two mermaids, were not recorded. A song for Captain Hook (“Walk the Plank”) and one for the Pirates (“Pirate Song”) are both exactly what you’d expect. The other numbers, sung by Wendy, are “Peter, Peter” (the only song with any dramatic function), “Build My House” (a soprano snooze), and “Who Am I?” Bernstein wrote both music and lyrics for the songs, which he wanted to reuse when he was asked to provide a score for the subsequent production of Peter Pan that would star Mary Martin. Here, Jean Arthur is rather charming as Peter. Boris Karloff is a surprisingly effective Captain Hook, and Marcia Henderson sings Wendy’s songs in a soprano that you may appreciate more than I do. — David Wolf