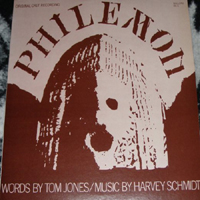 (3 / 5) Composer Harvey Schmidt has consistently written lovely, dramatic, and distinctive music. Philemon  is the story of Cockian, a street clown in ancient Rome, who is pressured by a Roman commander to impersonate the Christian leader Philemon and who eventually becomes ennobled enough to experience martyrdom. Schmidt’s songs are striking and effective, as are the lyrics of his collaborator, Tom Jones. The opening number, “Within This Empty Space,” establishes the raw theatricality and elements of ritual common to so many Schmidt-Jones shows while also introducing us to Cockian and to the specific, vaguely primitive sound of this score. Jones’ script and lyrics are more complex than usual, and all of the characters are distinctly limned from a musical standpoint. The cast is solid without ever being flashy. It’s headed by Dick Latessa as Cockian; Howard Ross as the Roman Commander; Michael Glenn-Smith as a young prisoner whom Cockian betrays; Kathrin King Segal as Kiki, Cockian’s performing partner; Virginia Gregory as the wife he has abandoned; and Leila Martin as the real Philemon’s wife. If you’re curious, you may be able to track down this long-out-of-print recording, or a tape of the TV version of the musical that featured the original cast.  — David Wolf