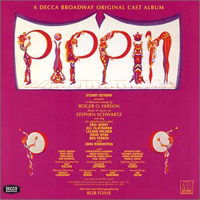 (3 / 5) Stephen Schwartz wrote the score for this hippy-dippy medieval musical. John Rubinstein starred as the son of Charlemagne, roaming the Holy Roman Empire looking for the meaning of life and instead finding war, sex, patricide, and — finally! — the love of a good woman. The oddball story was all-that-jazzed up by Bob Fosse, whose sexy, inventive staging made the show one of the biggest hits of the decade. Even with a fundamentally weak concept, there’s much to like here, starting with the unique, folk-jazz sound of the score. “Magic to Do,” led by narrator/emcee Ben Vereen, is the definitive band-of-strolling-players opening number; and Pippin’s first solo, “Corner of the Sky,” is a stirring piece of writing. Also hard to resist is that paean to pagan joys “No Time At All,” which provided veteran trouper Irene Ryan with her career sign-off. A very young Jill Clayburgh offers a lovely reading of the clear-eyed ballad “I Guess I’ll Miss the Man,” and Vereen and Rubinsten demonstrate split-second timing in the duet “On the Right Track.” The pure 1970s soft-pop orchestrations are, surprisingly, by Ralph Burns, who apparently could work in just about any style. As a result, this is one of the most intimate-sounding of all Broadway albums. — David Barbour 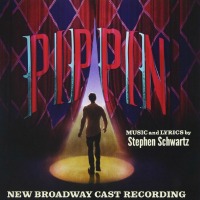 (3 / 5) Removing Bob Fosse’s staging from Pippin necessarily created a vacuum that Diane Paulus, this revival’s director, filled with a whole lot of everything: magic acts, acrobats, circus performers, and brassier new orchestrations by Larry Hochman. You may miss the imperturbable cool of the original recording, but this one has its compensations, beginning with Patina Miller, whose sassy, high-energy Leading Player is a constant delight. Matthew James Thomas’s Pippin is even better sung than John Rubinstein’s original, Terrence Mann amusingly captures Charlemagne’s fat-headed pomposity (even in “War is a Science,” still the show’s weakest number), and Rachel Bay Jones gives a charming, screwball spin to Catherine (the Jill Clayburgh role). In a class by herself is Andrea Martin; her recorded performance of “No Time at All” is necessarily missing the acrobatic turn that brought audiences to their feet in mid-number, but her warm, bigger-than-life persona comes through loud and clear. As Fastrada, the villain of the piece, Charlotte D’Amboise was sly and stylish on stage, but on the album she seems to be trying a little too hard. There are some changes in the lyrics of a few songs, and this recording of the score is more expansive than its predecessor; the scorching sex ballet that follows the sweet ballad “With You” is included here,  and there’s also an entr’acte, which the intermissionless original production never had. — D.B.