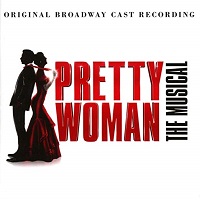 Original Broadway Cast, 2018 (Atlantic) 0 stars; not recommended. Movies that were popular in the latter part of the 20th century have become the go-to source material for Broadway musicals these days. If a film is beloved, a show based on it has a built in audience, and if the movie was made more than 20 years ago, the show can cash in on the “nostalgia factor.”  Or so the thinking goes. This cynical mentality is nowhere more prominently seen than in Pretty Woman: The Musical. Based on the wildly successful 1990 romantic comedy, the show tries to please its audience by sticking so closely to the original screenplay that whole scenes are recreated line for line. (Garry Marshall, the film’s director, worked on the libretto with J.F. Lawton before his death in 2016.) It also trades on nostalgia by bringing in ’80s-’90s pop-rock team Bryan Adams and Jim Vallance to write the score,  and if none of the songs are offensively unlistenable, they’re all ultimately unnecessary. Each one starts by stating the basic intention of the character singing it, usually at a grooving tempo, with the following verses essentially rewording that same sentiment in a higher key and at a faster tempo. While this allows power belters like Samantha Barks and Orfeh to wail appropriately, it does little for the story. One need only read generic song titles such as “I Can’t Go Back,” “Something About Her” and “Never Give Up On a Dream” to understand the lack of insight Adams and Vallance have brought to the score. Set in a sanitized version of LA, the show follows Vivian (Barks, in the role that made Julia Roberts a movie star), a down-on-her-luck hooker who’s hired by reserved billionaire Edward (Andy Karl) as his escort for the week. After some playful banter and small blowups, the two fall in love, and all turns out well in the end. As Vivian, Barks decides not to channel Roberts’ bubbly charm in the film and go for a more nuanced performance, but her attempts are undermined at every turn by the banality of the lyrics and the repetitiveness of the music. Though Karl’s faux rock and roll growl suits the score’s style, he is ultimately wasted in the role of the withdrawn Edward. As Vivian’s spunky fellow prostitute Kit, Orfeh goes for broke and pulls out every vocal trick she has on songs like “Rodeo Drive” and “Never Give Up on a Dream.” But, like her costars, she’s failed by the lifeless pop tunes. Only Allison Blackwell, in a featured spot, gets any music with energy in it, during the sequence when Edward takes Vivian to the opera — but this is because she gets to sing a bit of La Traviata, which orchestrator/arranger Will Van Dyke seamlessly incorporates into the Adams-Vallance song “You and I.”  It’s a memorable moment in a recording you’ll otherwise forget about as soon as you finish listening to it. — Matt Koplik