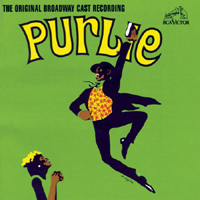 (3 / 5) With music by Gary Geld and lyrics by Peter Udell, this show is based on the play Purlie Victorious by Ossie Davis, who adapted the musical in collaboration with Udell and the show’s producer, Philip Rose. Neither version is often revived, probably because, in both, the portrayals of African-Americans living in the Deep South “in the recent past” are dicey by current current standards. But the score of Purlie is quite wonderful, from the rousing Gospel anthem “Walk Him Up the Stairs” straight through to the the end. In the title role, Cleavon Little is dynamic and charismatic in the character-establishing “New Fangled Preacher Man” and other numbers. As Lutiebelle, the sweet girl who’s in love with him, Melba Moore displays a thrilling voice, especially in the roof-raising “I Got Love.” Novella Nelson is a worthy partner to Moore in the soulful duet “He Can Do It,” and it’s fun to hear Sherman Hemsley, who later gained fame on TV’s The Jeffersons, delivering the comedic “Skinnin’ a Cat.” The generally excellent sound quality of the cast album is somewhat marred by distortion in a few sections, possibly caused by defects in the original recording or by deterioration of the master tape prior to digital transfer. — Michael Portantiere