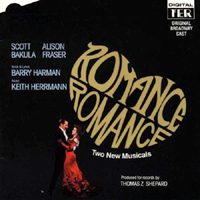 (2 / 5) Romance Romance is intelligent and well crafted, but the score is not one you’ll necessarily be eager to hear more than once. The show consists of two one-act musicals. In the first, a rich, bored, 19th-century Viennese man and woman masquerading as members of the bourgeoisie meet, become romantically involved, and finally reveal the truth. In the second piece, two contemporary couples sharing a house in the Hamptons ponder whether one of the couples is on the verge of adultery. The problem is an absence of defined characters: In the first act, Alfred and Pepi are just a generic man and woman, while the second-act foursome have no traits to distinguish them from one another or from anyone else. The score has careful writing by lyricist Barry Harman and composer Keith Herrmann. Their songs perform the narrative functions obediently, but we always hear a lyricist at work rather than a character portrayal being built. Cast members Scott Bakula, Alison Fraser, Robert Hoshout, and Deborah Graham all sing well, which does help.  — David Wolf