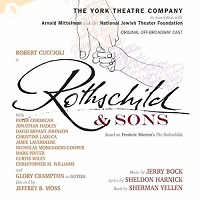 (3 / 5) Here is a major revisal of the 1970 musical The Rothschilds, cut down to one-act and including several previously unheard Jerry Bock-Sheldon Harnick songs,  plus some revisions by Harnick. The romance for son Nathan and the big ensemble numbers are gone, and the political leaders’ roles have been trimmed. The cast totals 11, compared to more than 30 on Broadway; when Mayer Rothschild (Robert Cuccioli) sings a shortened version of  “He Tossed a Coin,” it’s clear that the Frankfurt fair isn’t crowded. Joseph Church has reorchestrated the score for four players, compared to Don Walker’s sumptuous originals. What if anything in this York Theatre Company production compensates for the loss of size and spectacle of the original? Lyricist Harnick and librettist Sherman Yellen (composer Bock died in 2010) had long wanted to refocus the story on the Rothschild family and less on the sprawling European setting. In this, they succeeded; Rothschild and Sons is an intimate piece that emphasizes feelings and relationships. Mayer’s wife, Gutele — a moving Glory Crampton — is a more significant presence as the action unfolds through her memories. She grows from being satisfied with “One Room” to standing strong against Metternich in the reprise of the driving anthem “Everything.” Crampton also gets the best of the added songs, “Just A Map,” in which she frets over her sons as they crisscross wartime Europe. Nathan (Christopher M. Williams) has lost his silly patter number, but here he makes mistakes on arrival in England (“Tea’s Hot”) and then butts heads with his father in “He Never Listens.” The heart of the show is Mayer, the father. Cuccioli’s voice sounds terrific — his “In My Own Lifetime” is rousing — yet he lacks the warmth and humor that Hal Linden found in the character. On the one hand (as another Bock-Harnick character said), it’s wonderful that this revisal may grant new life to the show. But on the other hand, while there are plenty of musicals about families, how many are as daring as The Rothschilds — set in the chaos of late 18th-early 19th century Europe, about a family relying on financial maneuverings and political cunning to survive, with a rich score evoking late Baroque and classical masters? Stick with the original. — L.F.