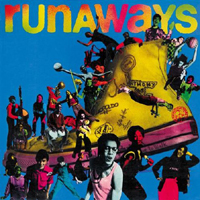 (3 / 5) Elizabeth Swados’s revue about street kids, developed by The Public Theater before opening on Broadway, was considered fresh and edgy when it debuted. Runaways is a collage of monologues and expressionistic songs featuring a young cast and “popular” music. Even if the occasional disco beats now sound dated, there’s lots of great stuff here; the Latin rhythms of “No Lullabies for Luis” and the tribal rap of “Enterprise” are among the best of what composer-lyricist Swados offers up. There are also some memorable melodies, as in the mesmerizing dirge “Every Now and Then” and the jaunty “Find Me a Hero.” Serious subjects like street violence and child prostitution dominate the show, but humor also abounds. Especially funny are “Revenge Song,” which has the runaways daydreaming about gruesome fates for their parents; “The Undiscovered Son,” in which they imagine their family members as celebrities; and the mocking “Where Are Those People Who Did Hair?” The entire 20-person ensemble radiates personality, passion, and intelligence; among what was then a largely unknown group are the now-familiar Trini Alvarado and Diane Lane. Karen Evans deserves a special mention for her unforgettable reading of the fiery song “To the Dead of Family Wars.” — Brooke Pierce