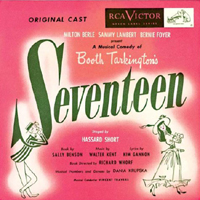 (2 / 5) “Willie, get a wiggle on!” That characteristic, gee-whiz, chorus-boy exhortation, in a song called “Weatherbee’s Drug Store,” opens the cast album of this aggressively homespun show chronicling the 1907 Hoosier romance of Willie Baxter (Kenneth Nelson) and flirty Lola Pratt (Ann Crowley). Based on a Booth Tarkington novel, and positively wallowing in the same postwar nostalgia that sired so many movie musicals of the day, Seventeen aims for charm in its score by Walter Kent and Kim Gannon. The treacle gets thick in songs like “Summertime Is Summertime” and “A Headache and a Heartache,” while the performances are often arch; get a load of the vocal preening in “This Was Just Another Day” and “Ode to Lola.” Still, there are a couple of fine show tunes here, “I Could Get Married Today” and “Reciprocity,” supported by plush Ted Royal orchestrations. And though the cast isn’t starry, the album does offer early audio peeks at The Fantasticks‘ Nelson and that distinctive Greenwillow ingenue, Ellen McCown. The recording is barely 40 minutes in length, but what’s here is a like a rich ice cream soda: very foamy and sweet, yet it still goes down easily. — Marc Miller