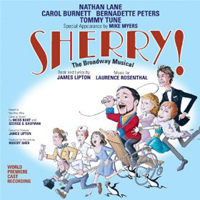 (3 / 5) Every flop musical should be so lucky: A deluxe presentation with an all-star cast and a 52-piece orchestra (67 for the overture!), this two-disc recording features every note of Sherry! and every cut song, plus some interviews. The show is composer Laurence Rosenthal and librettist-lyricist James Lipton’s 1967 tuner based on George S. Kaufman and Moss Hart’s classic comedy The Man Who Came to Dinner. The diverting score, conducted by Marvin Laird and sumptuously played, is smartly orchestrated to sound like a 1930s movie musical, but the bitchiness of the material becomes monotonous, and many of the numbers are extraneous. As for the cast, Nathan Lane hasn’t the innate elegance for Sheridan Whiteside, and Carol Burnett is comically expert but vocally worn in Lorraine’s songs. Bernadette Peters sounds lovely as Maggie in the ballads “Maybe It’s Time for Me” and “Imagine That”; Tom Wopat partners her with relaxed assurance. Tommy Tune is excellent as Beverly Carlton, and smaller roles are taken by Phyllis Newman, Lillias White, and Mike Myers. Even Rosenthal and Lipton participate, performing like seasoned troupers. — Marc Miller