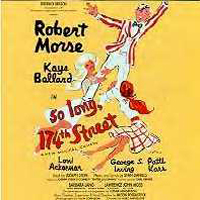 (3 / 5) Joseph Stein adapted his backstage comedy Enter Laughing, based on a novel by Carl Reiner, into a musical that had a dismal two-week run in 1976 but was recorded four years later with many of the original company members. Middle-aged Robert Morse is miscast in the central role of David Kolowitz, an 18-year-old Bronx boy who dreams of Broadway stardom. The show focuses heavily on the kid’s fantasy life, especially his dreams of fame and sex; “I’m Undressing Girls With My Eyes,” he confesses at one point. The best numbers include “You,” a duet made up entirely of lines from 1930s pop songs (“There’s a small hotel / Where you can do-do that voodoo you do so well”); “Bolero on Rye,” an imagined romantic encounter at a deli; and “Men,” a showstopper in which Loni Ackerman, as David’s girlfriend, torchily recalls her former flames. George S. Irving, playing the seedy actor who mentors David, delivers the score’s most notorious number, “The Butler’s Song.” A fantasy sequence of David as a Hollywood stud, it begins with the lines “He’s screwing Dolores Del Rio / That’s why he cannot speak to you,” and continues with “At 5:30 he humps Alice Faye / Then Jean Harlow at seven / Mae West at eleven / And, somewhere between them, Fay Wray.” As David’s mom, Kaye Ballard belts out “If You Want to Break Your Mother’s Heart.” Stan Daniels’ tunes are catchy, if a bit derivative, and his lyrics are full of good humor about Jewish families and adolescent angst. — David Barbour