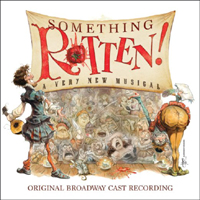 (5 / 5)The more one knows about Broadway musicals, the more convulsed with laughter one becomes upon experiencing Something Rotten!, a smart stew of shrewd satire and affectionate parody. It also helps to know something about Shakespeare, as the show’s riotous plot, set in the 1590s, concerns fraternal playwrights Nick and Nigel Bottom’s attempt to rival The Bard’s  popularity by penning a game-changing theatrical hit of their own.  Upon the advice of an imperfect soothsayer who foresees Omelette to be the title of Shakespeare’s greatest play, the sibling scribes, determined to beat The Bard to the punch, create a genre-birthing extravaganza: Omelette: The Musical.  Absent the visual humor of the production’s mockeries of iconic Broadway choreography, the cast album is a laugh-fest nonetheless, because much of the show’s spoofing lies in Wayne and Karey Kirkpatrick’s score, keenly orchestrated to recall the jazz-inflected sounds of Broadway’s Golden Age and the later pop-rock sensibilities. From the first-act show-stopper, “A Musical,” to the play-within-the-play numbers “It’s Eggs” and “Make an Omelette,” the songs overflow with hilarious musical-theater references. The abundant allusions come at such a frenzied pace that only by listening repeatedly to the recording can one digest every tasty morsel.  While Brian d’Arcy James, as Nick, persuasively bemoans “God, I Hate Shakespeare,” Christian Borle’s Tony-winning depiction of Nick’s nemesis as a leather-clad, Renaissance-era rock star grabs the spotlight.  The recording effectively captures Borle’s characterization of Shakespeare as evoked through his adoption of the British accent and patronizing tone of a rocker from across the pond; his “Will Power” and “Hard to Be the Bard” cleverly mimic ’60s and ’70s pop-music stylings. Considering its derivative nature, Something Rotten! is remarkably original, a fitting reflection of its undergirding themes of self-expression, artistic integrity, and the power of poetry combined with music. Show tune fanatics, to thine own self be true! – Lisa Jo Sagolla