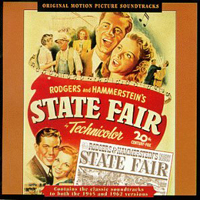 (2 / 5) The Rodgers and Hammerstein score for the 1945 film version of State Fair is unlike any of the team’s other efforts in that many of the songs are spotted as numbers performed at parties, nightclubs, etc., rather than helping to develop the characters. Still, it’s a fine score that includes “It Might as Well Be Spring,” “It’s a Grand Night for Singing,” the less famous but wonderful “Isn’t It Kinda Fun?” and the catchy title tune. This compilation contains all of the songs from both the 1945 film and the 1962 remake. The six songs and various reprises from the earlier movie are performed in slower tempi, and feature orchestrations by Alfred Newman. Dubbine for Jeanne Crain, Louanne Hogan sings “It Might as Well Be Spring” well, if impersonally, and Vivian Blaine and Dick Haymes sing almost everything else. The later movie cut one of the original songs and, with Hammerstein deceased, Rodgers wrote music and lyrics for five new ones, all of them weak. Farmer Tom Ewell has a creepy love song to a pig that includes the line “Warm and soft affection lies / In your teeny-weeny eyes.” Playing the mother, Alice Faye sings “Never Say No to a Man” as though apologizing for the lyrics. Pat Boone and Ann-Margret play one romantic couple, Bobby Darin and Pamela Tiffin (dubbed by Anita Gordon) are the other; they’re all okay. Musical outtakes from the first film and some instrumental music from the second one, arranged by Newman with Ken Darby, are also included. — David Wolf 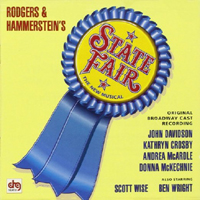 (4 / 5) The Broadway version of State Fair yielded an entertaining cast album. It includes all of the standards from the 1945 film, plus nine other Rodgers and Hammerstein songs: “So Far,” from Allegro; “The Man I Used to Be” and “The Next Time It Happens,” from Pipe Dream; “That’s the Way It Happens” and the deleted “You Never Had It So Good, from Me and ]uliet; and “Boys and Girls Like You and Me” and “When I Go Out Walking With My Baby,” both cut from Oklahoma! Rodgers’ lamentable ode to a pig, “More Than Just a Friend,” is less repellent as a barbershop quartet here than as the solo it was in the 1962 film. The recording features strong vocal performances by Donna McKechnie, Andrea McArdle, Scott Wise, John Davidson, Kathryn Crosby, and Ben Wright. Bruce Pomahac’s orchestrations are terrific, and so is Scot Wooley’s dance music. — D.W.