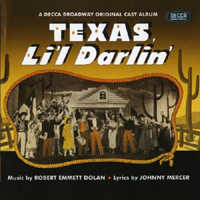 (3 / 5) Although it is now forgotten, this mild satire on Texas politics ran out the season, and a near-hit song or two came out of its score by composer Robert Emmett Dolan and lyricist Johnny Mercer. Originally released on 78s that preserved only about half of the score, the Texas Li’l Darlin’ cast album is a delectable time warp, transporting listeners to a bustling Broadway that was the Hit Parade’s primary source. “A Month of Sundays” is as typical as a 1949 ballad can get, with a pleasant melody and an all-purpose Mercer lyric; but “Hootin’ Owl Trail” is a real rediscovery, an irresistible easy-listener. So is “Affable, Balding Me,” a duet for Mary Hatcher, a spirited ingenue with a sweet soprano, and her suitor Fredd Wayne, who woos her with lyrics from Mercer’s top drawer. The lyrics of “Politics” are just as wonderful, filled with infectious rhymes such as “sonnets,” “bluebonnets,” and “Kostelanetz.” The no-name cast does very well with the material, which is paired with songs from the soundtrack of the film You Can’t Run Away From It on Decca’s CD. — Marc Miller