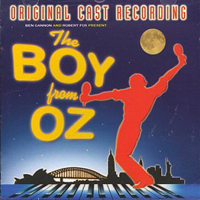 (3 / 5) Peter Allen wrote only one musical — the inane Legs Diamond, still prized by connoisseurs of flops — but his life story plays itself out in this glossy show. The Boy From Oz is a fast-paced biography and the first home-grown Australian musical theater hit. It traces Allen’s life from his tap dancing, piano-playing youth through his career as pop songwriter, showman, and celebrity gadabout. His meteoric rise to fame ended with his death from AIDS in 1992. The musical covers Allen’s work with Judy Garland, his marriage to Liza Minnelli, and, to no one’s surprise but his own, his belated realization that he was gay. Nick Enright’s flimsy book shoehorns Allen’s songs into dramatic contexts with varying success. “When I Get My Name in Lights” (from Legs Diamond) works well for the young Peter (Mathew Waters). Todd McKenney is charming and engaged as the adult Allen, with a reedy tenor that sails through the anthemic “I Still Call Australia Home.” Chrissie Amphlett makes an interesting Garland — she and McKenney have great rapport in “Only an Older Woman” — while Angela Toohey’s Liza is a dizzy whirlwind. Bits of the script heard on the recording, such as a news flash about the Stonewall Riots, give context to Allen’s growing self-knowledge. Although the album has an earnest, unpretentious feel, Allen’s original renditions of his songs are catchier than these, and no one can beat Olivia Newton-John’s version of “I Honestly Love You” for syrupy bathos. Still, this is a fun album, hokey but warm-hearted.  — Robert Sandla 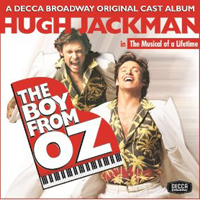 (3 / 5) The Broadway cast album of The Boy From Oz is like the Australian album on steroids: It boasts punchier orchestrations, stronger voices, and, most crucially, Hugh Jackman in the title role. All of this plus superior sound gives this recording lots of presence and oomph — just what Peter Allen was all about. Even the CD packaging is more luxurious, with crisp graphics, complete lyrics, and colorful production shots. The Broadway version retains the structure of the Australian original, but some songs have been assigned to different characters or scenes, and the show now opens with the ruminative “The Lives of Me.” None of this disguises the facts that the musical is insubstantial and Jackman was the sole reason for the Broadway production.  His strong, flexible voice is full of energy, easy confidence, and star power. While his thrilling stage performance does not translate fully to the recording, he is still an engaging leading man; his “Bi-coastal” and “Everything Is New Again” shine with showbiz know-how. Isabel Keating’s Judy Garland is febrile and funny, delivered with a fine belt. Stephanie J. Block rises to the challenge of the dramatic range that the Liza character gets in this version; she seems to grow in her songs, climaxing with a frenetic “She Loves to Hear the Music.” Jarrod Emick does what he can with the treacly “I Honestly Love You,” and Beth Fowler, as Allen’s mother, is a quiet powerhouse in “Don’t Cry Out Loud.” Of the two recordings of the show, this is the one to get.  — R.S.