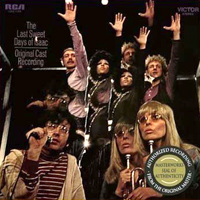 (2 / 5) Three years after their debut show, Now Is the Time for All Good Men, which was studded with well-crafted lyrics and lovely ballads, composer Nancy Ford and librettist-lyricist Gretchen Cryer appeared to have struck gold with The Last Sweet Days of Isaac. Very well reviewed and the winner of Obie, Drama Desk, and Outer Critics Circle awards, the show seemed a shoo-in headed for a long run, but there was just one problem: It didn’t have a second act, and audiences balked. Act I, represented by more or less the first half of this recording, is literate, odd, and very funny. It introduces us to the self-dramatizing Isaac, convinced that his every moment on earth is his last, and Ingrid, an inhibited secretary who has always longed to be a poet. These two are stuck together in an elevator. Onstage, Austin Pendleton was genuinely hilarious and wildly endearing as Isaac; his recorded performance is also wonderful, especially in a terrific song titled  “My Most Important Moments Go By.” As Ingrid, Fredricka Weber was quirky and appealing, sang well, and even played the trumpet! Still, this was Pendleton’s show, if “show” is the correct word. I don’t think there’s a coherent moment in the second act, which again focuses on Isaac and Ingrid. Here, they’re locked in individual prison cells 14 years earlier, able to communicate only through video cameras. — David Wolf