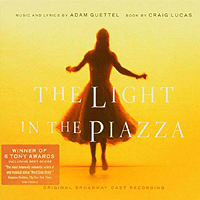 (5 / 5) The Light in the Piazza seemed to re-open the door for lush scores and musicals of honest sentiment of the type not seen since Rodgers and Hammerstein, at a time when modern musical theater writers were for the most part shying away from works of pure romance. Based on Elizabeth Spencer’s novel of the same title, the musical tells of Margaret Johnson, a Southern socialite, who takes her adult daughter, Clara, on vacation to Florence, Italy in the 1950s — only to have a local young man and Clara fall in love, despite Clara’s stunted mental maturity due to an accident in her childhood. For his Broadway debut, Adam Guettel wrote an overwhelmingly romantic score, rich in musical complexity and tender in its poetically precise lyrics, a fair percentage of which are in Italian in order to properly dramatize the native characters. Guettel uses the language and cultural barriers between the Johnsons and the Italians to his advantage by employing a musical language that is distinctly modern in structure, yet traditionally sweeping in sound. (Guettel and Ted Sperling are responsible for the fluid orchestrations.) Piazza is moving in its beauty, whether in its more intimate moments (“Dividing Day,” “The Beauty Is”) or its grander songs (“Il Mondo Era Vuoto,” “Say It Somehow”). The cast is exceptional, with Kelli O’Hara and Matthew Morrison providing touching, lovely performances as the two young lovers. But it’s Victoria Clark as Margaret who defines the album. Her delivery of the final song, “Fable,” in which Margaret prepares to finally let Clara go, would be reason enough to own this recording. The Light in the Piazza is a masterwork given a definitive presentation on the cast album — Matt Koplik