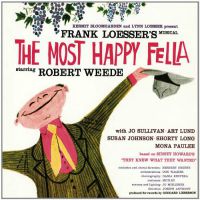 (5 / 5) When Frank Loesser’s adaptation of Sidney Howard’s They Knew What They Wanted opened on Broadway, the composer-lyricist quickly corrected those who suggested that he had written an opera. “Actually,” he said, “it’s just a musical with a lot of music.” Happily, The Most Happy Fella was recorded complete and released as a three-LP album (and also as a single LP of highlights). The two-CD edition gives us a rare chance to sample a mid-’50s hit in its entirety, dialogue and all. The recording is noteworthy for Don Walker’s lush orchestrations and underscoring, the cast’s emphatic line readings and rich voices, and Loesser’s stretching of the art form’s borders in terms of both musical style and morality. (The plot concerns a bride who is unfaithful on her wedding night, yet doesn’t get struck by lightning.) Yes, the score careens between musical comedy silliness and operatic intensity, some of the acting is artless, and there’s perhaps a bit too much repetition in the lyrics; but none of that matters, because Loesser’s musical storytelling is so passionate, his sympathy for his characters limitless, and the show is so sincere a portrayal of adult romance. As Tony Esposito, ex-Met baritone Robert Weede is superb; no one has ever surpassed him in the role. Jo Sullivan, as his pretty “Rosabella,” uses her rather thin top notes effectively to communicate vulnerability. (In a real-life romance, Sullivan and Loesser courted and married during the show’s run.) Susan Johnson is the definitive Cleo, while Art Lund captures Joe’s restlessness in “Joey, Joey, Joey.” Herbert Greene conducts with all of the sweep that this unique score requires. Although the album was recorded before Columbia switched to stereo, the mono sound is crisp and resonant. For those who love a really good love story, this is a tremendously moving performance — so much so that when Tony asks, “Young lady, what’s-a you name?” in the final scene, and “Rosabella” offers her surprising reply, you may weep with happiness for both of them.  — Marc Miller 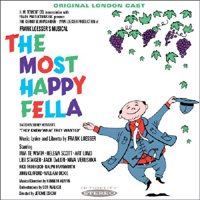 (3 / 5) The first stereo recording of Frank Loesser’s great romantic musical is a fine one, though it’s limited to as much of the score as could fit on one LP. The West End production wisely imported several of its principals from New York, ensuring authentic American accents. Helena Scott is a lovely Rosabella, while Libi Staiger is a superb, rafter-raising Cleo, well partnered by Jack DeLon’s Herman. The Maori basso Inia Te Wiata has voice to spare and the requisite sincerity for Tony, even if he overdoes the hearty peasant thing; hear him burble “Ornma so happy-happy, omma t’ink omma gonna bust!” Reprising his New York role of Joe, Art Lund sounds a little tired here. But the editing of the score is judicious, and the luscious stereo sound — even as heard on the Sepia CD, which was transferred from an LP copy of the recording — brings out vocal and instrumental subtleties that the mono original couldn’t capture. “How Beautiful the Days,” for instance, sounds more beautiful than ever. — M.M. 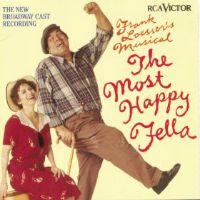 (2 / 5) The Goodspeed Opera House’s vest-pocket-size revival of Happy Fella was successful enough to transfer to Broadway’s cozy Booth Theater, where it ran out the season. The justification for turning this big musical into a smaller show was that the material would feel “more intimate,” and the substitution of two pianos for a full orchestra would bring audiences “closer” to the material. Excuse me, but Don Walker’s original orchestrations have never been emotionally distancing, nor do the two pianos heard here (plus an accordion in “Sposalizio” and a guitar in “Song of a Summer Night”) bring out any qualities previously lacking in Loesser’s music. The production was well acted and sung for the most part, although Spiro Malas as Tony is sometimes below pitch and often resorts to head voice, and Claudia Catania’s Marie is downright unpleasant. On the plus side, Sophie Hayden’s Rosabella is a fresh take on the role; she’s more tired, more resigned at first, and eventually, more transformed by love. The score was edited for this recording, which was originally released on one-CD — yet, somehow, nothing crucial seems to be missing. Still, pretending that “smaller is better” for this grandly ambitious piece is disingenuous. — M.M. 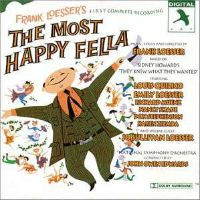 (4 / 5) Here is a well-conducted Happy Fella that is also well-cast for the most part. The bonus tracks of cut songs tell us more about the character Marie, Tony’s possessive sister, beautifully sung here by Nancy Shade. “House and Garden,” which was included in the unrecorded (but videotaped) 1979 Broadway revival, offers a peek into Rosabella’s wistful side. And “Wanting to Be Wanted,” an earlier draft of “Somebody, Somewhere,” is given a sensitive reading by Jo Sullivan. Mrs. Loesser should be proud of her daughter Emily, whose Rosabella is vocally secure and acted with great range. Louis Quilico interprets Tony solidly, if unimaginatively, but there’s vocal strain in his performance; he was quite elderly at the time of the recording. And Richard Muenz, who was a sexy Tony in the ’79 revival, sounds like he’s walking through the role here. On the plus side, Karen Ziemba’s Cleo is wonderful, and Don Stephenson’s Herman is ingratiating. Overall, this is a detailed, loving recording, with expert performers such as George Dvorsky, Walter Charles, and even Kristin Chenoweth taking tiny roles. Conductor John Owen Edwards doesn’t over-sentimentalize the score — and we can be grateful, too, for the inclusion of the stirring exit music. Generous packaging offers the complete libretto and numerous photos from both the original production and the recording sessions for this release. If I could have only one version, I’d still take Columbia’s Broadway cast album, but there’s value added in this luxurious tour. — M.M.