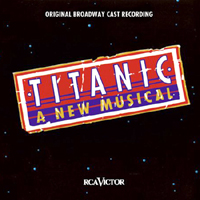 (5 / 5) You’ll be hard-pressed to find more beautiful choral singing than that heard on the cast album of Titanic, the musical about the sinking of that famed “ship of dreams.” Composer-lyricist Maury Yeston’s score is grand and sweeping, and more than 40 voices are employed to represent the Irish peasants, middle-class professionals, wealthy society types, et al. aboard the doomed vessel. For this clash of classes, Yeston offers a suitable variety of music, from the stunning, operatic opening sequence to some Celtic-tinged tunes. A rag number and Yeston’s own lovely version of “Autumn” — supposedly one of the last songs played by the musicians on deck as the ship went down — give the score a sense of time and place, while Jonathan Tunick’s lush orchestrations evoke the feelings of adventure, hope, and loss that the disaster still inspires; you can hear the growl of an angry ocean in the overture, and you can see the black night described by a sailor in the haunting “No Moon.” Yeston shows remarkable theatricality and innovation throughout the score, notably in two sequences: “The Blame,” a heated colloquy sung by the ship’s owner, builder, and captain; and “Mr. Andrews’ Vision,” in which the horror-struck ship builder foresees the ship’s chilling final moments. All of the lyrics are strong, and Yeston is fortunate that Michael Cerveris, Brian d’Arcy James, David Garrison, John Cunningham, Victoria Clark, and a superlative cast of actor/singers preserved his words and music for this recording. — Brooke Pierce