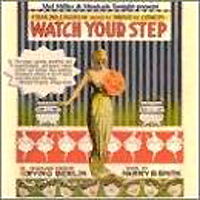 (1 / 5) Irving Berlin’s first hit was exhumed by the Off-Off-Broadway company Musicals Tonight! in 2001. According to the CD notes, the show is a fairly typical 1914 frolic with a thin-to-the-point-of-transparency plot about a will that requires its recipients never to have been in love. After that, you’re on your own; there’s no synopsis to indicate how the songs fit into the story. Furthermore, Berlin interpolated numerous songs into the show during its several months’ run, and all of them are included here.  While the recording is unquestionably of archival importance, it comes off as less a show album than a collection of novelty tunes from the early World War I era. Songs like “Come to the Land of the Argentine,” “Show Us How to Do the Fox Trot,” and “Settle Down in a One-Horse Town” could be from virtually any musical of the same general provenance. For that matter, they all sound alike, set as they are to the same ragtime beat. The young cast sings with enthusiasm; the one semi-name, David Sabella, is amusing in numbers such as “Lock Me in Your Harem.” Berlin enthusiasts and those with an interest in the period should add a star or two to the rating above, but the CD has little to offer the general listener. — David Barbour