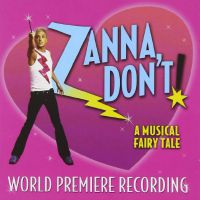 (2 / 5) Like the show itself, the cast recording of composer-lyricist Tim Acito’s “musical fairy tale” Zanna, Don’t! will probably appeal mainly to teenagers or early-twentysomethings with limited interest in musical theater. Anyone with more sophisticated taste will find Acito’s work unpolished and sometimes downright sloppy. His music is generally fine, a series of pop-influenced melodies well in keeping with the youthful, bouncy tone that helps sell this musical about a world where homosexuality is the dominant orientation. But Acito’s lyrics may cause fits among purists, because they’re inaccurately stressed throughout and very poorly rhymed, as in: “love/enough,” “lover/another,” “clues/you,” “this/is,” and “town/around” — all of these examples from the first song alone. Lyrical transgressions aside, Acito’s songs make for moderately enjoyable listening, with at least one — a high-school musical spoof about heterosexuals in the military, titled “Don’t Ask, Don’t Tell” — demonstrating a cleverness that’s worthy of notice. Jai Rodriguez gives an endearing performance as the title character, who’s determined to help his classmates find love, but it’s Anika Larsen’s high belting in “I Ain’t Got Time (for Nothin’ But Love)” that brings Zanna, Don’t! as close as it gets to real excitement. — Matthew Murray