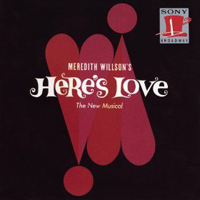 (2 / 5) Here is an industrial-strength musical version of the Christmas movie classic Miracle on 34th Street. Directed by its producer, Stuart Ostrow, after Norman Jewison departed during the tryout, Here’s Love was Meredith Willson’s third Broadway effort, following The Music Man and The Unsinkable Molly Brown. It was helped along to a 334-performance run by a fine cast, a healthy advance sale, and a sumptuous production that featured choreographer Michael Kidd’s re-creation of the Macy’s Thanksgiving Day Parade. The album magnifies the show’s major flaw: its middling score, which will likely remind the listener of better songs from previous musicals by Willson, who wrote this show’s book, music, and lyrics. Things start off promisingly enough with “The Big Clown Balloons.” There’s also a perky title song that’s determined to blast its way into every theatergoer’s heart. But then Willson resorts to interpolating his old hit “It’s Beginning to Look a Lot Like Christmas,” a Yuletide chestnut and the most memorable tune on the album. Otherwise, the score consists of generic songs that could work just as well in Act I or Act II, or even be dropped into any other so-so musical. But, uninspired as the score is, at least it’s well presented here in bright orchestrations by Don Walker and dance-music arrangements by Peter Howard. Janis Paige brings considerable warmth and zest to such material as the reprise of a mediocre song titled  “Look, Little Girl.” Her pitch-approximate intonation and frequent switching of vocal registers in “My State” make for a highly individual sound, but her charisma is irresistible throughout the recording. Craig Stevens and the men gamely work to put over “She Hadda Go Back,” salvaged from what must have been the bottom drawer of Willson’s trunk. Laurence Naismith and Valerie Lee also give appealing vocal performances. — Morgan Sills