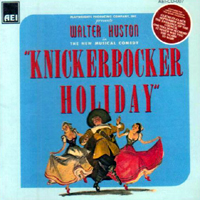 (3 / 5) Boiled-down radio broadcasts of Broadway musicals were not unheard of in the 1930s, and the few that have been released commercially in subsequent decades generally provide interesting, if scratchy, listening. This release of a 1938 broadcast of Knickerbocker Holiday with members of the original Broadway cast was especially valuable in its day, since for many years there was no other recording of Kurt Weill and Maxwell Anderson’s political satire; as a bonus, AEI’s CD also incorporates material from a 1945 radio version with a studio cast. The show spins a diverting yarn of old New Amsterdam and its autocratic mayor, Peter Stuyvesant, as filtered through the imagination of narrator Washington Irving, played by a young Ray Middleton. In the process, Anderson has fun with jokes about old New York and scores still-trenchant political points about media censorship and totalitarianism in democracy’s clothing. The best thing about this recording is that it preserves for posterity Walter Huston’s performance in his debut role in musical theater. Huston whispers “September Song” unforgettably, and makes every syllable count. His comic timing is also impeccable, even though he’s playing against the tepid Tina Tienhoven of Jeanne Madden. The bad news, aside from the decidedly dated sound, is the heavy editing of the musical program: Included here are just four complete songs and slivers of others, along with the briefest of overtures. At least the other principal ballad, the tender “It Never Was You,” gets a complete rendering by Madden and Richard Kollrnar. — Marc Miller 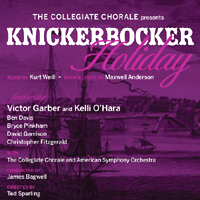 (4 / 5) Thanks to the Collegiate Chorale’s 2011 concert presentation with a notable group of celebrity guest artists, recorded live at Alice Tully Hall, we finally get to hear all of Knickerbocker Holiday. And what a strange score it turns out to be. Even as Weill’s trying to sound “Broadway,” his German roots are evident; such ballads as “Will You Remember Me?” and “We Are Cut in Twain” might have snuck in from Mahagonny or Threepenny. It’s a blaringly political piece, very anti-New Deal, and the authority-slapping “How Can You Tell an American?” could be an anthem for the Tea Party. Some of the score — “Our Ancient Liberties,” “Bachelor’s Song” — is actually dull. But Weill’s orchestrations, saxophone-heavy and liltingly conducted by James Bagwell, are characterful and graceful. Victor Garber is Peter Stuyvesant; consummate pro though he is, he isn’t Walter Huston, and his vigorously acted “September Song” lacks the easy charm of the original. Kelli O’Hara trills prettily and is well partnered by Ben Davis. Bryce Pinkham, David Garrison, Christopher Fitzgerald, and Brooks Ashmanskas fill out the cast in lesser roles. The audience sounds like it’s enjoying the show, and, occasional longueurs aside, so will you. — M.M.