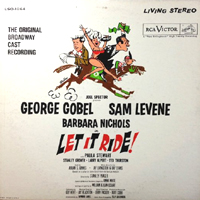 (1 / 5) Apologies to songwriters Jay Livingston and Ray Evans, but here’s the show with arguably the worst title song in the history of Broadway — and that includes Happy Hunting. While the doleful tune isn’t heard until track six of the first side of the LP, by then, this pallid adaptation of Three Men on a Horse has already proven its lack of worth. The show starts with a chorus singing about how they must “Run, Run, Run” the rat race, but the melody erroneously suggests joy. Then comes the saccharine “The Nicest Thing,” in which a wife tells her husband why she loves him, followed by “Hey, Jimmy, Joe, John, Jim, Jack,” sung by George Gobel in his horribly nasal voice. That voice also spoils the score’s ace trump, “His Own Little Island,” a song that should be better known — which is more than can be said for “Broads Ain’t People.” Moving on, you’d expect that a song titled “Love, Let Me Know” would be plaintive, but the melody for it is brisk. There is an item that would spark the dullest party, the kitschy stripper’s song “I Wouldn’t’ve Had to Shake It.” Still, by the time you reach “There’s Something About a Horse,” you’ll have realized that little about Let It Ride is worth the trip. — Peter Filichia