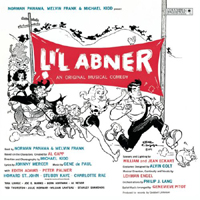 (4 / 5) The cast album of this hit, faithfully adapted from Al Capp’s deep-fried comic strip, has a complicated history that’s worth telling because the recording warrants attention. One of the last monaural cast albums, it made a brief appearance on CD around 1990 in a no-frills transfer that quickly became a collectors’ item. Rumor had it that the entire album had been recorded in stereo, but it turned out that the binaural tracks were unusable because the orchestra was recorded entirely on one track, the singers on the other. Sony cleaned up the monaural tracks and added several items for this CD reissue: a full-stereo overture, a stereo version of the “Sadie Hawkins Ballet,” missing finale material, and some never-heard-before original-cast moments. To top it off, folded in as bonus tracks are a Rosemary Clooney single of a fine song that was cut from the show, “It’s a Nuisance Having You Around,” and a Percy Faith instrumental of another out-of-town casualty, “The Way to a Man’s Heart.” All of this stretches the CD’s length to a generous 72 minutes. The cast album portion of it is a first-class Goddard Lieberson recording of a quintessential Golden Age smash, with a score that boasts strong Gene DePaul melodies and incomparable Johnny Mercer lyrics. The rhymes are ingenious, the satire still pertinent (there’s even a funny song about genetic engineering), the Dogpatch idiom even more resonant than it was in Capp’s strip. Although Peter Palmer as L’il Abner sounds a little stiff on the recording, he was so ideally cast that he had a hard time thereafter getting casting directors to picture him in any other role. Edith (Edie) Adams sings sweetly and sexily as Daisy Mae, and Stubby Kaye’s Marryin’ Sam shines in show-stopping material. One only wishes that Charlotte Rae, as Mammy Yokum, had a whole song to herself instead of just a few bars of the opening number. Lehman Engel’s musical direction displays enormous verve from the overture’s first rockabilly notes. By the way, notice the gaffe in “Put ‘Em Back,” when a chorus girl comes in early and then stops herself short. — Marc Miller

(2 / 5) Paramount’s film version of Li’l Abner was among the most faithful of its era, retaining a lot of the Broadway score and several of the leading players, as well as a stage-bound production design. So there are few surprises on this soundtrack album. Among the pluses: Peter Palmer has loosened up a lot, Nelson Riddle’s new arrangements are fresh and snazzy, and this recording is in end-to-end stereo. But there are minuses: Several stage songs are missing; the one new ballad, “Otherwise,” doesn’t equal the one it replaced, “Love in a Home”; some of Mercer’s lyrics were dumbed down for the movie; and Imogene Lynn, the voice double for Leslie Parrish’s Daisy Mae, hasn’t as much style as her stage counterpart, Edith (Edie) Adams. Still, the album is a pleasant souvenir of one of the better ’50s stage-to-screen transcriptions. — M.M.