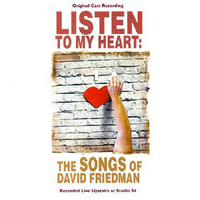 (4 / 5) Skillfully programmed and directed by Mark Waldrop, this revue had a brief run Upstairs at Studio 54. Happily, it yielded a “live” cast album that will bring pleasure to those who saw the show and introduce some wonderful music to those who missed it. As presented onstage and in this two-disc set, Listen to My Heart demonstrates that David Friedman’s range as a composer-lyricist is greater than he’s often given credit for. It’s true that much of his output falls into two general categories: life-affirming anthems and heart-on-the-sleeve love ballads. Some of the lyrics of these songs can be difficult for the more cynical among us to take, but Friedman’s sincerity is genuine, and there are several other types of songs included here. “Live It Up,” for example, is a funny up-tune that’s very different from two standout, country-inflected numbers: the witty “If You Love Me, Please Don’t Feed Me”(written with Robin Boudreau and Scott Barnes) and the heartfelt “My White Knight” (not to be confused with the song of the same title from The Music Man). Given that so much of Friedman’s work would seem to mark him as a paragon of positive thinking, one of his most surprising creations is “Catch Me,” a poignant plea for help from a person on the brink of suicide. In complete contrast, there are some hilariously funny “Jewish humor” numbers, performed to the hilt by Alix Korey. Happily, her rendition of “My Simple Wish” (a.k.a. “My Simple Christmas Wish”), long the stuff of cabaret legend, is preserved here. Thanks to this two-CD recording’s excellent sound quality, all of the performances can be fully appreciated: Allison Briner’s soulful delivery of “My White Knight”; Joe Cassidy’s powerful “Catch Me” and Michael Hunsaker’s sympathetic response, “I Can Hold You”; and Anne Runolfsson’s “What I Was Dreamin’ Of” and “We Can Be Kind,” which show her to be one of the finest singing actresses of her generation. First-rate ensemble work and three songs played and sung beautifully by Friedman himself complete the listening experience. — Michael Portantiere