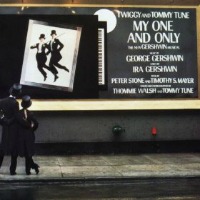 (3 / 5) This “new” musical was written around old George and Ira Gershwin songs. During its troubled pre-Broadway tryout, book writer Peter Stone and the uncredited Mike Nichols oversaw an extensive reworking of the show, with star Tommy Tune taking over as director. They surprised everybody by pulling it off; by the time My One and Only reached New York, it was delightful. The cast album is not a fully accurate representation of the production, which was much more fluid than this recording suggests, with witty dance numbers popping up from the ensemble as well as the stars. (This is the show in which Twiggy and Tommy Tune tap-danced in water during “S Wonderful.”) Several songs have been left off the album, including the chorus number “Just Another Rhumba.” A more serious omission is dancer Honi Coles’ big first-act showcase, “High Hat” — a skillful weave of dialogue, singing, and dance that was inexplicably replaced on the recording by a straightforward version of “Sweet and Lowdown.” On the other hand, Twiggy and Tune are heard duetting in “Little Jazz Bird,” even though that number was cut from the show. Throughout, the stars are charming, and the music and lyrics incomparable. A partial list of highlights: “I Can’t Be Bothered Now,” “Boy Wanted,” “Soon,” “He Loves and She Loves,” “How Long Has This Been Going On?” and, of course, the fabulous title song. — David Wolf