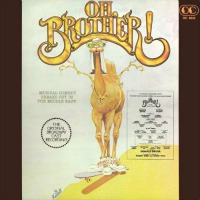 (3 / 5) It may have been pure folly for Donald Driver and Michael Valenti to invite comparison to The Boys from Syracuse with this modern musical retelling of Shakespeare’s The Comedy of Errors, reset in the Middle East. In fact, they were rewarded with a three-performance run. Still, there’s much to enjoy on this 49-minute cast album, starting with Valenti’s tuneful, singable melodies. Songs like “Everybody Calls Me by My Name,” “OPEC Maiden,” and “How Do You Want Me?” radiate goodwill. Driver’s lyrics are good-natured throughout. The songs are sung by an exceptionally rich-voiced young cast, with David Carroll, Judy Kaye, Mary Elizabeth Mastrantonio, and Larry Marshall giving their all. (Listen to Mastrantonio’s insane high note at the end of “That’s Him.” What planet is it from?) Not all of the material is golden, and the recording’s inclusion of several cut numbers — “Revolution,” “It’s a Man’s World,” “My World’s Comin’ Unwrapped” — only justifies their excision. But this show was honest and unpretentious, and its best qualities are nicely captured here. — Marc Miller