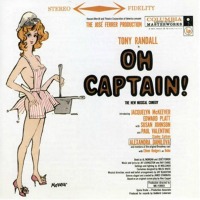 (4 / 5) For their Broadway songwriting debut, the Hollywood team of Jay Livingston and Ray Evans freely adapted/the British film The Captain’s Paradise and did outstanding work. Here is a full, integrated score that nimbly tells the story of a sea captain (Tony Randall) with a prim English wife (Jacquelyn McKeever) just outside London and a sizzling French mistress (Eileen Rodgers) in Paris. True, some of the lyrics snicker sophomorically about sex or contort themselves wildly to rhyme (“This report is special on / How I achieve my echelon”). But consider the compensations: a tuneful, generally clever set of songs with one hit (“All the Time”) and some other fine writing (“You Don’t Know Him,” “Surprise”), plus a supercharged atmosphere and game principal performances. The supporting cast is strong, too: Edward Platt reveals a sturdy bass-baritone in the lovely “It’s Never Quite the Same,” and the great Susan Johnson gives all she’s got to “Give It All You’ve Got.” (Her inflection on “Save your strength for the honeymoon and give it all you’ve got” is packed with innuendo.) Oh Captain! didn’t run very long, and the score isn’t absolutely top-drawer; but there are many nice moments here, and the album is a lesson in how a recording produced by Goddard Lieberson makes second-rate material sound first-rate. — Marc Miller