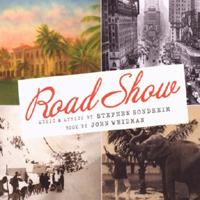 (1 / 5) What started off as a coruscating musical-comedy cavalcade ended dour and dumpy with the 2008 premiere of Road Show, the final (?) incarnation of Stephen Sondheim and John Weidman’s Mizner Brothers biomusical. As spearheaded (and speared) by director John Doyle, this is American history pageantry scalped of the fun, joy, and — well, the bounce that characterized the work’s three earlier incarnations. (See separate review of the recording of one of those versions, Bounce.) Wilson and Addison are played here by Michael Cerveris and Alexander Gemignani with maximum sense of occasion and minimal charisma, weighing down even the better numbers — such as the romantic “The Best Thing That Has Ever Happened” and the ostensibly scheming “The Game” — to the point where they can’t rise above the muck. Morose, muddy orchestrations by Jonathan Tunick and indifferent musical direction by Mary-Mitchell Campbell don’t inject any much-needed energy. Among the supporting cast, which also includes Claybourne Elder as Addison’s lover and William Parry as the boys’ father, only Alma Cuervo as Mama Mizner suggests  in her aching solo “Isn’t He Something!” the combination of wit and heart that should drive this story. The rest of the recording, like the show at this point, is, as the opening number puts it, a waste. — Matthew Murray