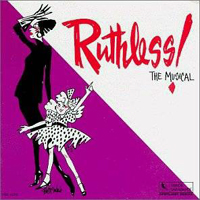 (3 / 5) Ruthless! is a very campy show, first produced Off-Broadway in 1992 and then in Los Angeles the following year, about a talented little girl named Tina Denmark (Lindsay Ridgeway), who loves to sing and dance. All of the characters in the show are women, though you can’t help wondering if some of them are being played by men. (In this cast, one of them is.) The others on hand include Tina’s mother, who most often identifies herself only as “Tina’s mother” (Joan Ryan); an aggressive talent agent named Sylvia St. Croix (Loren Freeman); Tina’s third-grade teacher, Miss Thorn (Nancy Limari), who came to New York to be an actress but was mugged before she left Penn Station; a brassy theater critic named Lita Encore (Rita McKenzie); and a few more, all of whom seem to exist only to exploit the little girl. Near the end of the first act, it seems that Tina kills someone, which we know because her mother sings: “Oh, what’s to become of my only daughter, who I have protected from croup and split ends? So many lessons that I should have taught her — like for example, to not kill her friends.” Has Tina murdered another child who got a part she wanted? That’s possible, but from the album alone, unknowable. Tina is sent away to reform school and, after that, it’s hard to understand the additional characters we meet, or anything that happens. Still, the show’s lyrics, by Joel Paley, are often clever and are written with real craft. The music, by veteran dance arranger, musical director and pianist Marvin Laird, is brisk. — David Wolf 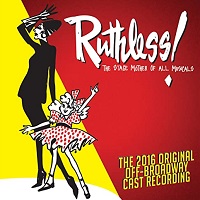 (3 / 5) Ruthless! is a fun camp-fest of a show, but as clever as the score is, it wasn’t necessarily crying out for a second recording. That said, this album of a well received Off-Broadway production is worth at least a listen or two for its overall strong cast, pretty much equal to the original in terms of quality, and fine musical direction. Here we have Tori Murray as Tina, Kim Maresca as her mom, Andrea McCullough as her teacher, and Peter Land as her agent. One disappointment: Though its nice to have the big-and-brassy voiced Rita McKenzie, who made a career with an Ethel Merman tribute show, back in the bravura role of theater critic Lita Encore, her singing voice here has quite a wobble as compared to her performance on the previous recording. Perhaps the main reason why cast album collectors might want to purchase or at least sample this one is the inclusion of a few bonus tracks — one of them, “”I’ll Be an Unkie’s Muncle,” featuring Bernadette Peters. (Laird has played piano and conducted for that beloved musical theater star since she was 13, and this recording was used in the Off-Broadway revival of Ruthless! as a song heard on the radio during a scene change.) The album is very well produced, and the booklet that comes with the CD offers several fun color photos of the production, as well as an enjoyable and informative essay about the show and its creators by music journalist James Gavin.  — Michael Portantiere